Potatoes ‘can be part of healthy diet,’ help with weight loss, study says 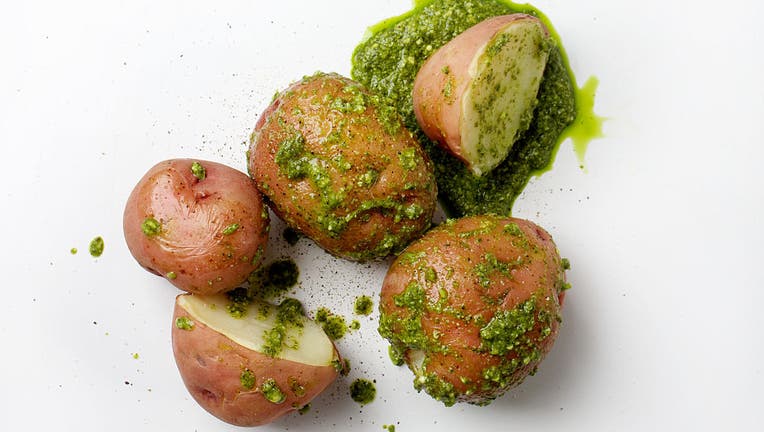 FILE – Boiled California Gold potatoes are pictured with pesto, salt, and pepper. (Photo by Deb Lindsey For The Washington Post via Getty Images).

BATON ROUGE, Louisiana – Potatoes have developed a reputation for causing weight gain and a higher risk of type 2 diabetes. However, a recent study suggests that the versatile starch does not increase that risk and may actually help people lose weight.

The study, published on Nov. 11 in the Journal of Medicinal Food, examined how a diet that included potatoes affects key health measures. Potatoes are a starchy food that our body breaks into glucose to use as energy. In addition to starch, they contain vitamins, minerals, and fiber in the skin.

The study involved 36 participants between the ages of 18 and 60 who were overweight, obese, or had insulin resistance — a health condition in which the body’s cells do not respond well to insulin, and glucose does not enter into the cells to make energy. Insulin resistance is linked to obesity, high blood pressure, high cholesterol, and type 2 diabetes.

The researchers from Pennington Biomedical Research Center in Baton Rouge, Louisiana, found that potatoes did not increase the risk of type 2 diabetes. Instead, they found that participants who ate a diet rich in beans and potatoes — based on their personalized caloric needs — experienced reduced insulin resistance and weight loss.

“We demonstrated that contrary to common belief, potatoes do not negatively impact blood glucose levels,” Dr. Candida Rebello, an assistant professor at Pennington Biomedical and co-investigator of the study, said in a statement. “In fact, the individuals who participated in our study lost weight.”

The study received funding from the Alliance for Potato Research and Education and the National Institutes of Health, though the authors say the funders had “no role in the design, analysis, or writing of the manuscript.”

Beans are often touted as a good food choice for people with diabetes thanks to their soluble fiber. Previous studies have also shown that eating both beans and peas can improve blood glucose levels in individuals with newly diagnosed type 2 diabetes, the authors of the new study noted.

The participants were fed controlled diets of either beans, peas, and meat or fish, or white potatoes with meat or fish. Both diets were high in fruit and vegetables and substituted an estimated 40% of typical American meat consumption with either beans and peas or potatoes. The study lasted for eight weeks.

“People tend to eat the same weight of food regardless of calorie content in order to feel full,” Rebello said. “By eating foods with a heavier weight that are low in calories, you can easily reduce the number of calories you consume.”

To increase the dietary fiber of the potatoes, they were boiled with the skin intact and then refrigerated between 12 and 24 hours, the researchers said. Potatoes were incorporated into the main lunch and dinner entrées, such as shepherd’s pie and creamy shrimp and potatoes, and served together with sides such as mashed potatoes, oven-roasted potato wedges, potato salad, and scalloped potatoes with lunch and dinner entrees.

“The key aspect of our study is that we did not reduce the portion size of meals but lowered their caloric content by including potatoes,” Rebello said. “Each participant’s meal was tailored to their personalized caloric needs, yet by replacing some meat content with potato, participants found themselves fuller, quicker, and often did not even finish their meal.”

Rebello added: “In effect, you can lose weight with little effort.”

Once 540 pounds, Jeff Brinker is now half that weight and feeling better than he’s felt in decades. Here’s how he did it.

The researchers compared a diet with potatoes to a diet with beans and peas and found them to be “equal in terms of health benefits.”

“People typically do not stick with a diet they don’t like or isn’t varied enough,” Rebello said, noting how potatoes are a fairly inexpensive vegetable to incorporate into a diet.

Kristian Morey, a registered dietitian and clinical dietitian with the Nutrition and Diabetes Education program at Mercy Medical Center in Baltimore, who was also not involved in the study, noted how the potatoes were cooked.

“One interesting detail that they mention in the study was that they cooked and cooled the potatoes prior to serving them to participants. This process can make some of the starch contained in the potato slower to digest than before, and this can improve insulin sensitivity and glucose tolerance when consuming such food,” Morey told Medical News Today.

“It is also important to note that they consumed other foods—such as protein foods—with the potatoes, which can improve glycemic response as well,” she added.

Dr. John Kirwan, Pennington Biomedical Research Center’s executive director and principal investigator on the study, called obesity an “incredibly complex disease.” Kirwan said the center is working to tackle the issue in a variety of ways, including research that looks at how and why bodies react the way they do, studies that look at individual responses to diet and physical activity, as well as policy-level discussions and community programs that promote strategies to live healthier lives.

“These new data on the impact of potatoes on our metabolism is an exciting addition to the arsenal of evidence we have to do just that,” Kirwan said.

This story was reported from Cincinnati.