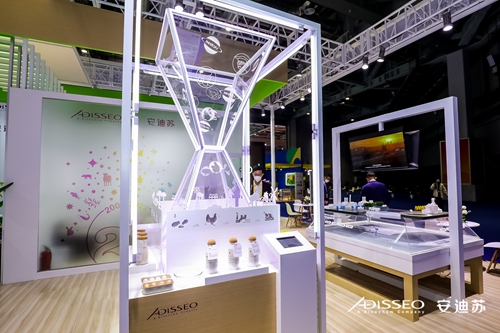 As the Chinese saying goes, “food is the first necessity for the people.” Ensuring adequate food for the Chinese people is always a top priority for China. As China has become a moderately prosperous society in all respects, having enough to eat is no longer a problem. The ever-growing needs of the people for a better life mean that they are concerned about whether their food is both good quality and nutritious.

At the ongoing fifth China International Import Expo (CIIE) in Shanghai, exhibitors displaying food, nutrition and health products have garnered much attention, reflecting the huge potential of the Chinese market in these fields.

Adisseo, a feed additive manufacturer from France, is participating in the CIIE for the fifth consecutive year. The company displayed its core products, including the liquid methionine product Rhodimet AT88, at the expo.

China’s strategic plans for the breeding industry and the livestock sector have created  enormous market opportunities to the animal feed and additive industry, Hao Zhigang, Chairman of Adisseo, said in an inclusive interview during the expo. He added that the company stands ready to expand its operational scale and boost investment in China to meet the country’s needs involving food security and green development.

“CIIE enables us to continuously expand our circle of friends”

As an “old friend” of the CIIE, displayed multiple categories of animal nutrition products and solutions at the food and agricultural products exhibition area at the expo. Just like the other companies that have attended the expo on multiple occasions, Adisseo attaches great importance to the expo’s role.

Hao said the CIIE, which is the first import-themed state-level expo in the world, has become an important platform that helps China promote opening-up and “double circulation” of both domestic and international markets. The expo is a tremendous opportunity for companies like Adisseo to tap into the Chinese market.

Methionine for ruminants, one of Adisseo’s flagship products, is a feed additive mainly for livestock, and has many customers in Europe and the US. Thanks to the CIIE, Chinese dairy companies have gradually realized the value of methionine for ruminants, and Adisseo signed a contract with Chinese dairy giants such as Mengniu Dairy and Bright Food, Hao noted. “Through exchanges at the expo, our clients gained benefits from our products and we expanded the industrial chain in China through them,” he said.

Hao pointed out that Adisseo has strengthened its ties with leading enterprises in the industry, including Cargill, New Hope, Sunner, Mengniu and Bright Food, by participating in successive editions of the CIIE, which has continuously enhanced the company’s influence in the industry and expanded its circle of friends.

Adisseo’s success story mirrors the charm of the CIIE. Statistics show that the four previous editions of the expo saw a cumulative intended turnover of more than $270 billion. The CIIE enables all countries and all parties to benefit from the opportunities of China’s vast market as well as the country’s institutional opening-up and deepened international cooperation.

Prospects presented by the CIIE are illustrative of China’s greater opportunities. By attending the expo each year, global companies can spot the latest market trends in the world’s second-largest economy so that they can launch their products and services with a more targeted approach.

Adisseo has more than 80 years of experience in the field of feed additives, which is a key element in the food value chain, especially in the animal protein supply chain.
Take Adisseo’s exhibits at the fifth CIIE as an example, Rovabio® offers a range of enzyme solutions that helps improve the digestibility of feed stuff and contributes to a better breeding environment.

SELISSEO® enables animals to produce more antioxidant enzymes under stressful conditions, and helps them fight oxidative stress, and improves their health and productive performance. MetaSmart®, a source of methionine for ruminants, provides essential nutrients for cows to increase milk yield and improve health and reproduction.

Hao said Adisseo pays close attention to the goals for the breeding industry during the 14th Five-Year Plan (2021-2025) period set by China’s Ministry of Agriculture and Rural Affairs (MARA), including making the hog breeding industry and poultry breeding industry a 1 trillion yuan (about $137.9 billion) market each. China is also implementing an action plan to revitalize the dairy industry and is promoting green aquaculture.

“China has provided a broad market for the animal feed and additive industry, which including not only the development plan for the poultry industry, but also the livestock secto,” Hao said. He added that Adisseo plans to introduce its overseas products and services to the Chinese market; and as the market continues to expand, it actively seeks investment plans in China to realize localization and grow with the Chinese market.

Meanwhile, the world’s first industrial-scale FeedKind® facility in Southwest China’s Chongqing municipality, which was developed by Calysseo Chongqing Co, Ltd, a joint venture between Adisseo and Calysta, is in the commissioning stage and will start production in 2022.

Hao noted that a ban on antibiotics imposed by the MARA in 2020 is another key issue. From July 1, 2020, feed manufacturers stopped the production of commercial feed containing antibiotic growth-promoting additives (excluding traditional Chinese medicine).

Over recent years, the negative impacts of excessive use of antibiotics on food safety and the natural environment have become more severe, and banning antibiotics has become a trend in the livestock sector across the world.

Noting that antibiotics were used to promote growth and improve immunity, Hao said the ban on antibiotics means replacing antibiotics with probiotics, biotin and other feed additives serving the same purposes, which will, in turn, create a large market.

While “green” is a buzzword at the fifth CIIE, Adisseo adheres to the changes brought about by China’s “dual carbon” goal, which is to peak carbon dioxide (CO2) emissions before 2030 and achieve carbon neutrality before 2060. What is perhaps not widely known is that the feed additive industry is closely linked with low-carbon development.

With regard to helping reduce CO2 emissions, feed additive companies like Adisseo work to ensure a reasonable ratio of feed to further reduce greenhouse gas emissions during the process of animal farming.

The livestock sector is a significant contributor to global human-induced greenhouse gas emissions, according to the Food and Agriculture Organization of the United Nations (FAO).

For example, cows may produce methane due to incomplete digestion of feed stuffs, Hao explained, adding that Adisseo’s products can optimize the efficiency of nitrogen utilization and reduce emissions of greenhouse gases such as methane and CO2 in the breeding industry.