by happysalad_kgkf50
in Wheatgrass Shots
0 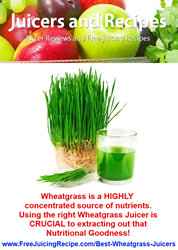 There’s no arguing that wheatgrass is rich in chlorophylls, anti-oxidants and other nutrients. However, without the right juicer, you won’t be able to extract out that nutritional goodness!

The tender young shoots of the wheat plant (Triticum aestivum) are commonly referred to as wheatgrass. Many wheatgrass juicers have been manufactured, however, not all of them are efficient in extracting out the chlorophylls, anti-oxidants, enzymes, vitamins, and minerals in the wheatgrass. This is where the TOP 5 Wheatgrass Juicer Review comes in handy by helping the consumer weed out the low-quality juicers from the high-quality ones.

Pros and Cons of Electric vs Manual Wheatgrass Juicers Compared.

When it comes to juicing wheat grasses, there is the option of going manual or electric. The main advantages of manual juicers are that they are smaller, eco-friendly and cheaper (starting at less than $40). Manual juicers with prices as low as $40 can be very attractive, however, these generally give lower yields than electric wheatgrass juicing machines do. Also, many users of manual machines have admitted that they eventually lost interest in juicing because it involved ‘elbow grease’ every time they wanted to juice. Another disadvantage of manual juicers is that mounting them can potentially damage the kitchen countertops if one is not careful enough.

Electric juicers have several advantages over manual juicers: (i) they are convenient to use, (ii) their high horse power motors are able to extract the maximum number of wheatgrass shots, (iii) they don’t have to be mounted on countertops, so they don’t damage any kitchen countertops, and (iv) most models can be used for juicing not only wheat grass, but also most other fruits, vegetables and nuts. This is why electric juicing machines are gaining in popularity among juicers. Some of the most popular electric juicers for juicing wheatgrass are the Samson 6 in 1 juicer, the Dr. Squeeze Green Queen, the Omega J8006 Nutrition Center, and the Tribest Green Star Elite Twin Gear Juicer.

According to the review, if one must go with a manual juicing machine, they should go with a high-quality model like the Miracle Exclusives stainless steel juicer or the Hurricane wheatgrass juicer. They’re not the cheapest of manual, hand-crank juicers, however, they give the highest yields, and are the most durable models with the longest warranty periods.

By virtue of being rich in chlorophylls, vitamins, minerals, enzymes, amino acids, and anti-oxidants, wheatgrass is known to improve blood regeneration, decrease blood pressure, enhance detoxification/cleansing, improve fertility, cure acne, eliminate toothaches, alleviate arthritis and constipation etc. The list is virtually endless. It is believed to be more nutritious and healthier than green juice from most other plant sources. Most available literature only discuss the health benefits of wheatgrass even though several minor side-effects have also been reported. These include nausea, headaches, and diarrhea. Only a few people develop these, and they are likely to go away after the first few wheatgrass shots. The nausea and headaches are usually attributed to the detoxification initiated by the wheatgrass juice. It’s not uncommon to get these symptoms with any detoxifying/cleansing protocol. Diarrhea is usually due to consuming too much at a time. If the body is gradually introduced to wheatgrass, starting at about 0.5 ounces and then gradually increasing to 2 ounces, chances are these side-effects will never be experienced.

Visit http://FreeJuicingRecipe.com/ for everything about wheatgrass and detailed reviews on recommended juicers.

Tips for sticking to healthy diet while eating out – mycouriertribune.com

Can a strain of wheatgrass help farmers use less water?

Can a strain of wheatgrass help farmers use less water?