by happysalad_kgkf50
in Acai bowls
0

Entrepreneur Charles Lee is on a growth curve with both his brick-and-mortar restaurants and free-standing, unattended robotic smoothie machines. 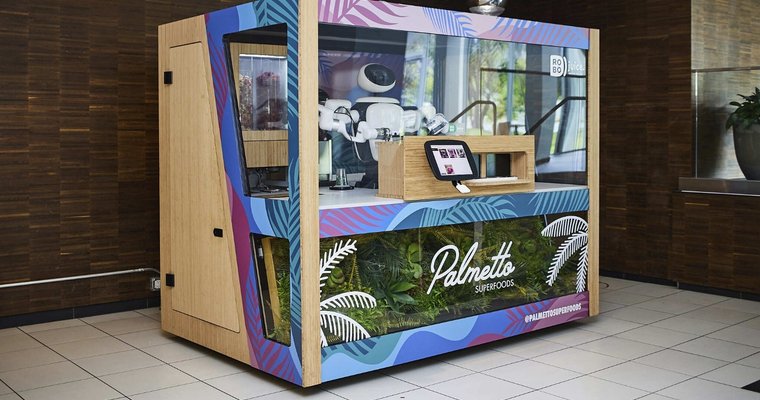 The robot can make and serve an acai smoothie bowl in less than a minute compared to the five to 10 minutes brick-and-mortar stores take.

A technophile from an early age who gravitated to e-commerce after graduating from the University of California Riverside, Lee’s other passion has always been acai, the deep purple fruit associated with weight loss and anti-aging.

In 2019 he was able to combine his acai passion with his technology interests when he and some partners launched Palmetto Superfoods, a San Francisco restaurant focused on acai and superfoods that offered online orders.

It didn’t take long for Lee to add self-order kiosks, and after witnessing positive customer response, he “went for broke” and invested in an unattended robotic kiosk that allows the customer to watch a robot prepare and serve the dish and get served in two minutes or less.

On the fast track

Today, Lee is on a growth curve with both his brick-and-mortar restaurants and free-standing, unattended robotic smoothie machines.

“People really gravitated towards us because we are the healthier option.” Lee told this website in a phone interview, looking back to his company’s beginnings.

After launching the business in September of 2019, everything was going great until COVID hit in March of 2020. Lee worried he would have to close the restaurant, but he chose not to.

As one of the few restaurants that remained open at the time, sales soared, particularly online/pickup orders. Online sales jumped from 15% pre-COVID to 50%.

“It [business] spiked when COVID came along,” he said.

Self-order to the rescue

In June of 2020, on the day after Memorial Day, he introduced his first self-order kiosk, an iPad equipped with a Square payment device and self-order software provided by Kios.

The cashier transitioned to a support role, helping customers as needed and taking cash for cash orders at the cash register. Customers can’t change their orders at the kiosk but can ask the staff to change it.

“I have my staff fully focused on making sure the orders come out perfectly,” he said. “That’s been a huge savings for us.”

After one year, someone still operated the cashier station — but less than 5% of the time on a daily basis. Most orders were made at the kiosk or online.

“We don’t want people waiting in line,” Lee said. “We really want to make it easy for the customers.”

The kiosk also freed Lee from having to go to the bank regularly for change. “That’s definitely been a big help as well,” he said.

The kiosk delivered a 15% sales bump without taking add-ons, an option Lee has thus far not taken advantage of.

There are 30 items on the menu, with “build your own” the most popular.

With two stores, Lee has about 50 employees, all part-time. There are five staffers working from 8 a.m. to 6 p.m. On the weekend it becomes eight to nine people.

Recognizing the benefits of faster customer service — both on customer experience and sales — Lee was receptive when a representative of a self-serve, robotic smoothie maker reached out to him on LinkedIn in late 2020.

“I wanted to see if it was for real,” Lee said.

By last summer’s end, the company, Robojuice, also based in San Francisco, had a working prototype.

“This robot can actually produce a whole acai,” Lee said, which is something that other machines that offer smoothies do not do.

The robotic investment was substantially higher than Lee’s previous technology investments, but he was intrigued by the possibilities.

“We believed in their technology and what it could do, not just for the front end consumer, but also for the back end consumer [the staff],” Lee said. “We could make orders more efficiently because of the more automated machinery they have in place. We felt really good about them.”

The Robojuice robot sits like a pilot looking outward from the enclosed, 104-inch wide by 83-inch tall rectangular kiosk facing the customer. The robot can make and serve an acai in two minutes and a smoothie bowl in less than a minute compared to the five to 10 minutes the brick-and-mortar store takes to make and serve these orders.

Lee invested $50,000 to purchase the first Robojuice machine and installed it at the Atrium Mall food court in April in San Francisco, operating from 11 a.m. to 5 p.m. Fridays. The investment includes a remote machine monitoring service.

The customer places an order on a tablet and pays with a card, prompting the robot to make the order using its two arms as the customer looks on.

Ingredients such as fruits and vegetables are stored in temperature controlled containers. Once an order is made, the robot measures, cuts and dispenses the ingredients into a cup. The system dispenses any liquid such as coconut water and plant based milks prior to blending. Additives such as powders, seeds and granola can be added before or after the blending.

The only staff involved is a “food runner” who fills the inventory in the machine. No one is physically present at the machine other than the customer.

“If something’s low on inventory, an alert will go up on their end, they’ll relate that communication to the runner; the runner will go and fill the dispenser,” Lee said, adding that he can view the machine’s activity in real time on the Square app.

With limited hours, the runner fills the machine once a day. On a busy Friday, there are over 100 customers.

With extended operating hours, Lee expects it will be filled two or three times a day.

“We think in a right location with a lot of high traffic…it is the perfect set up,” Lee said. He envisions it in airports, campuses and theme parks.

“People love to hover and see the action,” he said. “People have been really gravitating towards it.”

The robot’s biggest tech point, according to Lee, is the self-cleaning blender.

In the next two years Lee hopes to have 10 to 12 Palmetto Superfoods restaurants plus the Robojuice kiosks statewide.

Skip the Supplements and Eat These Collagen-Rich Foods Instead

Skip the Supplements and Eat These Collagen-Rich Foods Instead